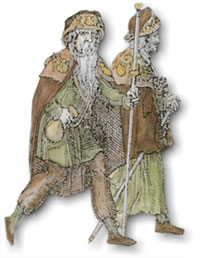 Many today are drawn to walk the ancient pilgrim routes, often using the journey as a time of personal spiritual reflection. Some will simply be curious about the churches and monasteries en route, others will find their interest engaged at a deeper level, and they will soon realise that the architecture and decoration of the these religious places draws them into a different world, where religious concerns dominated life, and encounters with saints and demons were everyday experiences. In these reflections I follow the journey of a medieval wool merchant, Médard de la Chaise Dieu, along the Via Podiensis from Le Puy-en-Velay to St-Jean-Pied-de-Port across south west France, the first half of his pilgrimage to the shrine of St James at Santiago de Compostella in northern Spain. Médard is my creation, but there must have been many like him who made the pilgrimage to Santiago. He is quite a reflective pilgrim, and his story and the things he thinks about as he travels, have been chosen to help us enter his world, to reflect the preoccupations of medieval Christianity, and to provide a background to the architectual and decorative symbolism of the churches along the Via Podiensis.

These reflections were written for a pilgrimage I made with a group in July 2014 following the Via Podiensis, travelling in parallel with the Ely Cathedral Choir. They are inspired by the places which we visited – just a few, alas, of the many that provide hospitality for pilgrims. My principal source is Jonathan Sumption’s book Pilgrimage (Faber: 1975), and unattributed page references are to his book. The biblical passages are those we used en route, and are taken from the New International Version (International Bible Society: 1982).

Comments are closed, but trackbacks and pingbacks are open.

Guide to the Pages

NB Where sub-pages drop down, there is also content on the main page. Clicking on the page title will open that page.

ABOUT  a biographical sketch introduces me, and there is also the text of an article I wrote about The Effect of Economics on Ethics.

SPIRITUALITY includes materials about Prayer and Spiritual Direction. The sub-page Lectio Divina describes a way of praying with the Bible, or other devotional writing.

PILGRIMAGE & RETREATS  explain what pilgrimage and retreats are about and give details of my recent and forthcoming pilgrimages and retreats. Pilgrimage also includes some of talks that I have given on pilgrimage. In Retreats you will find the addresses I gave for the Ely Ordination Retreat in 2005: The Living Reminder.

BOOKS  gives details of my publications, most of which can be downloaded.

ST BENEDICT  brings together materials on Benedictine Spirituality and Leadership.