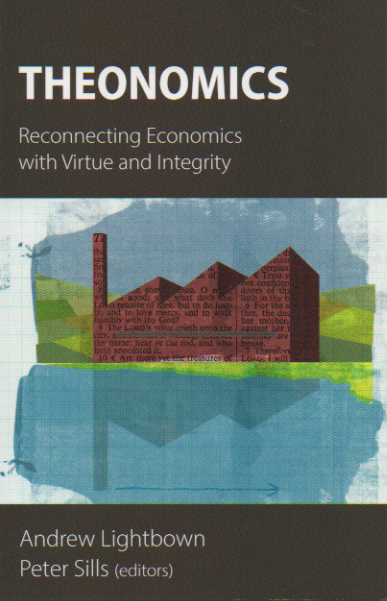 ‘Where are we going? For several years now it has been apparent, if officially unacknowledged, that generally accepted economic ideas are not working.’ Not only is economic theory divorced from real life, many areas of economic life have cut themselves adrift from accepted standards of  ethical behaviour. This collection of eleven essays by different contributors, jointly edited with Andrew Lightbown, considers various aspects of economic life, from education to employment, illustrating in each case the resources that the Christian faith offers for reconnecting economic life with virtue and integrity. Peter Sills contributes the Foreword, two essays: A Christian Framework for Economics and Leadership, Ethics and Virtue, and the Afterword.
[Copies available via the Contact Page (£10 + £2 p&p) and from the publisher in both print and e-book versions.]

Theonomics argues for the recovery of the classic virtues of prudence, temperance, fortitude, justice and humility as animators of a lively and Godly economy. Six key principles are offered to help those interested in integrating Christian ideas into the economic sphere: community, solidarity, justice, gift, service and subsidiarity. Theonomics offers encouragement and empirical evidence for the integration of Christian insights and everyday economic activity. (From the Preface by Martyn Percy.)

Guide to the Pages

NB Where sub-pages drop down, there is also content on the main page. Clicking on the page title will open that page.

ABOUT  a biographical sketch introduces me, and there is also the text of an article I wrote about The Effect of Economics on Ethics.

SPIRITUALITY includes materials about Prayer and Spiritual Direction. The sub-page Lectio Divina describes a way of praying with the Bible, or other devotional writing.

PILGRIMAGE & RETREATS  explain what pilgrimage and retreats are about and give details of my recent and forthcoming pilgrimages and retreats. Pilgrimage also includes some of talks that I have given on pilgrimage. In Retreats you will find the addresses I gave for the Ely Ordination Retreat in 2005: The Living Reminder.

BOOKS  gives details of my publications, most of which can be downloaded.

ST BENEDICT  brings together materials on Benedictine Spirituality and Leadership.